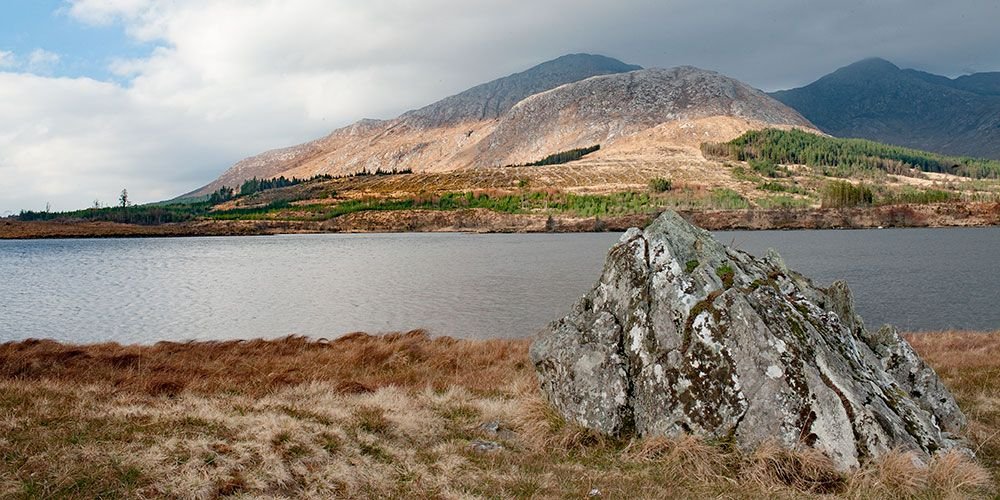 / environment
The link between Connemara and water is very deep: the whole region is crossed by more or less consistent little rivers, whose waters have generally the colour of turf (and they also taste the same... just give 'em a try!). As for the lakes, the area is dotted and lined with mirrors of different sizes, sometimes they are little more than puddles in the bog, sometimes real basins deserving a name. Along the coast the road frequently runs between lakes and arms of the sea creeping in the land: if you ask the locals, they will tell you that there is a foolproof system to understand whether it is fresh or marine water (apart from tasting it, of course ...), that is the presence of seaweeds! And speaking of the sea: the only fjord in Ireland is the Killary Fiord, the pretty village of Leenaun is located just at its inner part.
Here's a list of main rivers and lakes of Connemara:
Owenglin It has its source from a valley in the Twelve Bens, from which flows toward Clifden, to throw into its bay. The river is popular with anglers and canoeists, to whom it offers also a considerable difficulty level, given the presence of a very steep gradient and some rapids.
Erriff This river forms the Aasleagh Falls, waterfalls near Leenane, and then flows into the Killary Fiord.
Owenriff Rising from the mountains of Connemara, this river then flows to Oughterard, pouring its waters into Lough Corrib.
Lough Corrib - Loch Coirib This lake can be well considered as the giant of the county since it has an area of 178 km2; its homonymous effluent flows into the sea at Galway. Its basin lies almost entirely in the County of Galway, but a small northwest portion is instead part of Mayo. On its banks are located many pleasant towns and villages, such as Oughterard and Cong. The lake can boast the presence of 365 islands, one for each day of the year (although more detailed reckonings report that the number of islets is up to 1200!). The most important island is Inchagoill, more or less midway between Oughterard and Cong, easily accessible both by ferries that cross the Corrib and by boats for hire. On the island, there are the ruins of a monastic settlement, those of two churches - St Patrick and "the church of the Saints", an ancient cemetery and some derelict cottage. It\'s also remarkable the presence of an "Ogham" stele converted to the Christian religion through an engraved cross and an inscription considered the oldest in Ireland in Roman letters (dated 500 AD). The place is very impressive and it is often chosen for the celebration of weddings or baptisms.
Lough Mask - Loch Measca Another lake of considerable size (89 sq km) located north of Corrib, in County Mayo. Its western shore is dominated by Partry Mountains; fishing enthusiasts frequent it for the presence of trout and pike, while the birdwatchers easily sight every species of marsh birds such as the Red-breasted Merganser, Tufted Duck, Mallard, Sandpiper, but also typically marine species like the Herring Gull.
Lough Inagh, Lough Derryclare - Loch Eidhneach, Loch Dhoire an Chlair These two lakes, close one another, lie in the picturesque Inagh Valley, edged by the Twelve Bens to the west and the Maamturk range to the north.
Lough Ballinakill - Loch Bhaile na Cille A lake lying along the road from Moyard to Cleggan, which also separates it from the sea, a perfect nesting area several couples of Mute Swans.
Lough Kylemore The lake on whose banks stands the famous Kylemore Abbey; it is dominated by the Diamond Hill and Ben Baun, the highest peak of the Twelve Bens.
Lough Tully In the heart of the Renvyle Peninsula, this lake lies just behind the village of Tullycross and it is dominated by Tully Mountain (alas, it seems that the cartographer was lacking in imagination!).
Lough Fee Located on the road from Glassilaun to the N59, this is an almost magical place, with a promontory completely covered with rhododendron: pass along it in June and the vision will remain forever in your heart ...
Lough Nafooey - Loch na Fuaiche The lovely Na Fooey (from Gaelic: Loch na Fuaiche - the lake of blowing winds), of glacial origin, lies in a valley surrounded by steep mountains to the south and Partry Mountains to the north; many little influents, including the Fooey, flow into its basin; its main effluent is the Finny, whose waters throw in the nearby Lough Mask. According to the writer, this is the most beautiful lake of Connemara: a place of extraordinary beauty, where peace and calmness are supreme.
Doo Lough - the lake of dark waters is already part of County Mayo. It is bounded by Sheeffry Hills to the east and by Mweelrea to the west. Although technically located just beyond Connemara boundaries (which are approximate and indefinite) this wild place has an incredible and quite a primordial appearance. This lake is linked to a sad story related to the dark Great famine period.