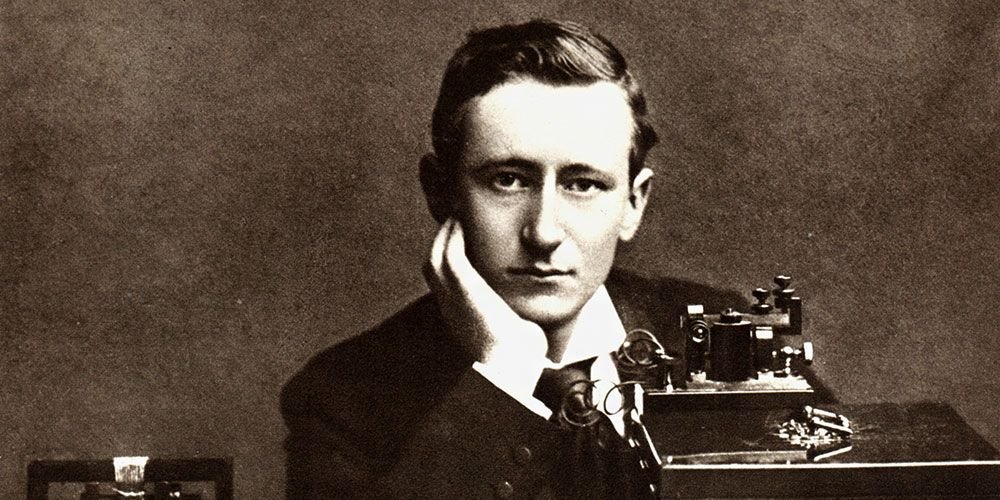 / people
Not many people know that Guglielmo Marconi (1874-1937), the distinguished Italian scientist who invented the radio, actually had strong links with Ireland. In fact, his mother Annie was one of four daughters of Andrew Jameson of Wexford, the well-known and wealthy owner of the homonymous whiskey distillery. Marconi, who has a closed and reserved character, had inherited from his mother the Irish irreverent "sense of humour" and an undoubted elegance in stylish dress and imposing bearing, which made him fascinating in the eyes of the fair sex.
Maybe it was this latter feature to capture the nineteen-year-old Beatrice O'Brien, an Irish noblewoman, daughter of the 13th Lord Inchquin, a descendant of legendary warrior-king Brian Boru. The wedding was celebrated in St. George's church, in London, on 16 March 1905: the Anglican family of Bea was initially unfavourable to this marriage, but the irresistible charm of Guglielmo soon softened the resistance of his future mother-in-law, who affectionately called him Marky. The wedding gifts for Bea were a good blend of romance (a diamond tiara) and technology (a bicycle), perhaps much less appropriate was the choice to shorten the honeymoon in Dromoland Castle, the ancestral home of the bride's family in the county Clare ...
Marconi, however, was eager to get back to work and implement his new project, the opening of a new transatlantic radio station in Clifden. Bea gave him three sons: Degna (1908), Giulio (1910) and Gioia (1916), nevertheless the marriage was officially annulled by the Roman Rota after a long bureaucratic procedure, letting Marconi free to marry in 1927 the young Roman aristocratic Cristina Bezzi Scali, who made him the father of Electra (1930).
The opening of the transatlantic radio station in Clifden took place on 17 October 190, thus fulfilling the ambitious dream of Marconi to establish a regular radio link between the coasts of the old and the new continent. The 300 acreage needed for the construction were purchased in 1905 from the Kendall family of Derrygimlagh. The site was carefully chosen by Marconi not only for its geographical position on the most western edge of Europe on the shores of the Atlantic Ocean, but also because of the surrounding bog that provided the energy that powered the station in the form of turf. Being one of the largest industrial parks in Ireland in those years, the station gave a major boost to the area, creating new jobs. Among the 400 people who worked in the station, the most famous was certainly Jack Phillips, the heroic radiotelegrapher who was employed here in 1908. He subsequently got a job as chief wireless telegraphist onboard the Titanic and is well known for keeping on sending SOS messages until the sinking of Titanic.
Attacked by the IRA forces in 1922, the plant was badly damaged and Marconi wasn't even refunded by the Government. The station never reverted to its complete efficiency and was gradually dismissed within a few years. Of the Irish experience of Marconi today are left some photographic evidence in the Station House Museum, the Marconi's Restaurant, located on Main Street and the station area; the location of the wireless station is now part of the Derrigimlagh/Marconi walking loop, which provides visitors with a five kilometre trail through an area of outstanding natural beauty within the Derrygimlagh bog. Visitors can can discover the stories of this famous site and it’s past history. The walk is made all the more interesting by a number of engaging and attractive features along the route, which are designed to engage visitors and encourage them to interact with the history of the location.