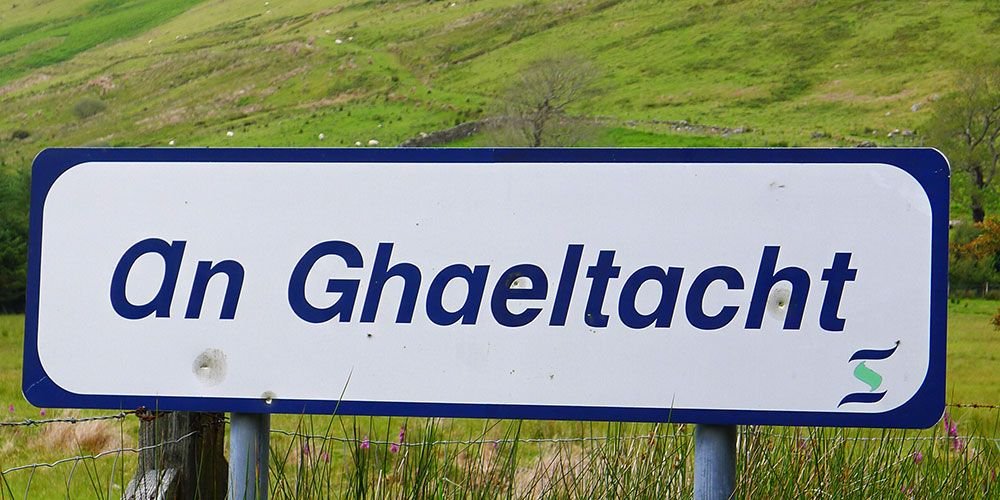 / traditions
Touring in the West of Ireland, it happens very often to see driving directions, car number plates and signboards of shops written in a completely different language from English and that has little to do with it: the Irish Gaelic. The Article 8 of Irish Constitution states that this is the national language and the first official language of the country, while the English ranks second; from 1st January 2007 the Irish Gaelic is also one of the official EU languages, although there is no requirement of translating EU documents in this language.
The Gaelic Irish is a compulsory subject of study in schools until the end of high school, and this the reason is why is fluently spoken by people between 10 and 24 years of age; besides, this language is most commonly used in the so-called “Gaeltacht” i.e. only in restricted geographical areas, mainly located in the West of the nation: the Irish-speaking counties are Donegal, Mayo, Galway, Kerry, Cork and Waterford.
For historical reasons these rural areas were the poorest and least developed in Ireland, and the language used here was gradually associated with the stunted and precarious living conditions of the residents, while English increasingly established itself as the official language, spoken in the cities by well-off, learned classes: this distorted view was, therefore, responsible for the slow but inexorable decline of Irish Gaelic.
The Irish language was revalued and revived when the renewed sense of nationalism led to the birth of Eire: according to data compiled by the Irish Central Statistics, in 2002 there were 1,570,894 inhabitants able to speak it, compared to 2,180,201 who can speak only English; besides, many of those who consider themselves as Irish Gaelic speakers do not necessarily use it in everyday life, but in the regions of the Gaeltacht at least 72.6% of the population are able to speak it fluently.

A brief history of the language

The Irish Gaelic - known locally as Gaeilge - is part of the Goidelic group of Celtic languages, which also includes the Scottish Gaelic and Manx. The Celtic language was already present in Ireland in 300 BC, but the first written examples are found on Ogham stone inscriptions, dated to around the 5th-6th century. Much of what we know about it has been taken from a document called The Book of Ballymote -Leabhar Bhaile an Mhóta (c.1391), which contains a key to this alphabet.
With the advent of Christianity Irish annotations were frequently present beside the Latin texts; some of these illuminated manuscripts have come down to us, such as the marvellous “Book of Kells - Leabhar Cheanannais” preserved in the Trinity College Library in Dublin.
The invasion of the Normans in England led these people to settle also into neighbouring Ireland, however, the relations with the islanders were generally friendly: for this reason, the Irish language maintained its vitality, also borrowing many terms from the language of the invaders still in use today. To avoid this integration with the natives, the English government promulgated in 1366 the "Statutes of Kilkenny", which effectively prohibited the Anglo-Normans from wearing Irish clothing, marrying the natives, and - of course - from speaking the local language, whose school-teaching was abolished. The use of Irish language was gradually opposed until 1871, while the English language took hold across the nation; the survival of Gaelic was also endangered by the poverty of the islanders and the Great Famine of 1845-48, which destroyed the crops of potatoes, the main food for rural population, thus forcing to emigration many of the few survivors.
In 1893 the scholar Douglas Hyde founded a movement called Conradh na Gaeilge -the Irish League, in order to recover the Irish language and prevent its disappearance. The movement motto “Tír gan teanga, tír gan anam - a country without a language is a country without a soul” became the slogan of the struggle for the independence from England: for this reason Gaelic was often associated with the nationalist movement. The contribution of Lady Gregory, founder of the Abbey Theatre in Dublin together with W.B Yeats, was actually determinant to revitalise the indigenous language in drama, poetry and literature.
With the birth of Eire, in 1922, Irish became the official state language, but it took a long time before it was used this way.
Nowadays, as we have said, the study of the Irish language is a compulsory subject in schools and it is an indispensable requirement for anyone who wants to be employed in civil service; all the official documents of the nation must be drafted in Gaelic, as well as the legal deeds. At present, there are now many radio and television channels (especially in the West) that broadcast programs and news in the Irish language, not to mention the fast growth of websites providing aid in learning the most common phrases accompanied by audio files.

The Uncial alphabet was originally used in medieval manuscripts as a variant of the Latin alphabet; this font set was used for the first time in the printing of a catechism manual “Aibidil Gaoidheilge agus Caiticiosma” commissioned in 1571 by Elizabeth I °, which was still used until the mid-20th century. Currently, the "Cló Gaelach", consisting of 18 letters, identifies everything that has to do with the Emerald Isle all over the world; in Ireland, this font is widely used as a decorative character for road signposts, and the sign of shops, Post offices and so on.