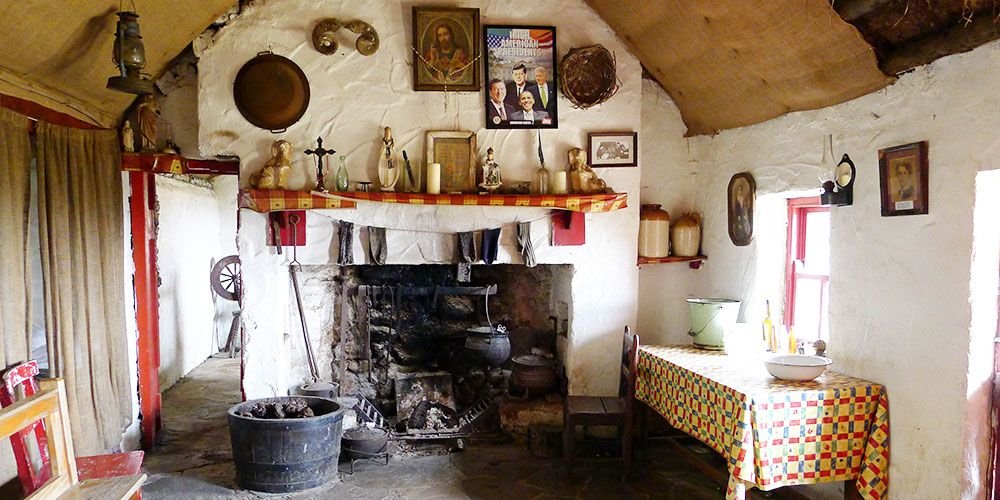 / traditions
Either people interested in history and traditional architecture or lovers of nature and landscapes can't miss a visit to Dan O'Hara Heritage Centre, approximately 8 km. from Clifden on the N59 leading to Galway. The center is well equipped and offers a tour by foot or on board of a picturesque wagon to reach the summit of the hill, where you can enjoy the view of a landscape of incomparable beauty, with wide views from Roundstone bog to the Twelve Bens range.
Halfway you can visit the cottage of Dan O'Hara, tenant of the 19th century, evicted from the land he worked since he had not paid the rent. Like many other Irish people, he emigrated to America, but his wife and three of his sons passed away during the crossing: his sad story became the subject of a nostalgic ballad. The cottage and its annexes (piggery, poultry pen, a small field of potatoes and a shed for the turf) has been rebuilt on the ruins of the pre-existing one and it represents a very interesting evidence of the rural and social history during the Great Famine.
Back to the Centre, you can also enjoy refreshments in the tea room, or shop in the craft store and attend to the inevitable audiovisual about the history of Ireland (well done, but a little too formal). Beside the Centre you can also visit the reconstruction of a crannóg, a ring fort, and a clochaun, respectively used as a housing and for military or religious purposes, dating back to the Neolithic period.
If you'd like to live on the premises, this well-equipped centre offers also an awards winner B & B. Unique, negligible drawback: since there aren't many Italian visitors there aren't info or booklets in this language, but the warm hospitality of Martin, his family, and his border collies largely compensates for this small problem and you'll be able to enjoy your staying. The centre is open seven days a week from April to October, from 10 to 18. Please contact the owner to arrange breaks during low season.

The story of Dan

Dan O'Hara lived with his wife and his seven children in a small cottage at the foot of the Twelve Bens. The entire harvest produced on 8 acres was strictly the property of the landowner, while Dan and his family survived on the potatoes grown on half an acre of land: this harvest was enough to feed 5/6 people for six months. The house had an only room shared with animals, thus Dan resolved to improve the hygienic conditions by increasing the size of the narrow windows. This was expressly forbidden by the infamous "Window tax" imposed by the British. Not being able to pay the penalty for infringement, the tenant and his family were evicted and compelled to emigrate. When Dan at last reached America, he was a grief-stricken man: his wife and three children had died during the crossing. Without means of subsistence, he was forced to leave the surviving children in an orphanage. The poor man ended his days selling matches in the streets, far away from its roots and the land he had loved so much.