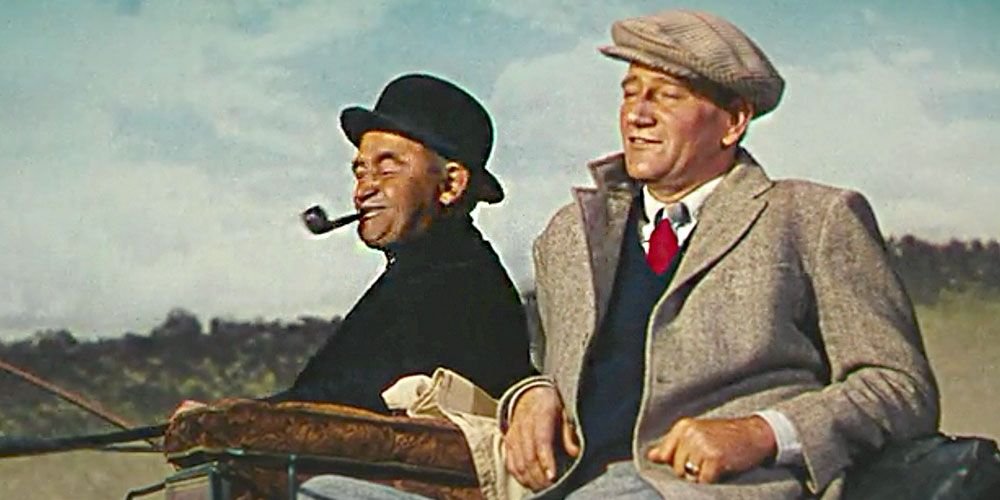 Sean Thornton (John Wayne), an ex-boxer who has left the ring after causing the accidental death of his opponent, returns from America to his native Ireland to buy the house where he lived as a child, to soothe with a quiet life the remorse that haunts him. Sean falls in love with Mary Kate (Maureen O'Hara), the beautiful sister of the quarrelsome Will Danaher, a wealthy landowner who has tried for years to buy the birthplace of Sean, without success
Sean asks the hand of Mary Kate, after having courted her according to local customs, assisted by the mediation of Michaeleen Oge Flynn (Barry Fitzgerald), but the girl's brother, hostile to the wedding, agrees to the wedding only thanks to a cute plan hatched by Father Lonergan (Ward Bond) and the cunning Michaeleen. Only after a fierce fight between Sean and Will, in which the ex-boxer is forced against his will to come to blows, Sean will finally conquer not only his wife but also her brother's friendship and the respect of all the inhabitants of Innisfree.

A great little gem, where nothing and no one is out of tune or out of place, from the protagonists to the character actors, from the locations to the landscapes, from the gags to the traditional music. This movie was keenly wanted by John Ford, also to celebrate his origins (the director, whose real name was Sean Aloysius O'Feeney, was the son of Irish immigrants), and can rely on the performances of two great actors: John Wayne, in an unusually tender and romantic role, and the beautiful Maureen O'Hara, who is perfectly at her ease in the shoes of an impetuous and passionate girl, already projected to a modern way of life, and yet still tied to the old traditions and conventions.
The supporting cast is really stellar: Victor Mc Lagen is definitely believable in the role of Red Will, a rude and grumpy man, but also naively in love with the widow Tillane; he's always ready to use his fists, but also to grant his friendship to his brother-in-law, having acknowledged the value (not just physical) of Sean.
Ward Bond is the vigorous Father Lonergan, able to ease the riots (even if this means giving up his personal battle against a sly fish …).
The polite and welcoming Rev. Playfair and his wife, ready to exercise duties of hospitality, are an adorable couple of nice Protestants, but above all we want to emphasize the great performance of Barry Fitzgerald, the cute Michaeleen Oge Flynn, matchmaker of the community, who takes under his wing the two lovers, however without omitting to enjoy a pint with his friends.
We can find in this movie a great Irish microcosm portraying a lost world, based on timeless values , a romantic comedy that doesn't overlook more complex themes (the Irish Civil War, the relationship between Catholics and Protestants), without losing its light-heartedly and deliberately retrò tone.
"The Quiet Man" is a timeless movie, which you can watch more and more, always with complete satisfaction, each time finding new aspects, little details, just sketched jokes, thus forgetting for a couple of hours the dull life which daily confronts us.

Maureen O'Hara sings with a remarkable voice the traditional song The Lake Isle of Innisfree, actually the actress attended to singing and dancing courses and also sang in the youth choir of the Opera in Dublin.
Many members of the cast had family relationships : actors Francis Ford, Arthur Shields and James O'Hara were respectively the brothers of John Ford, Maureen O'Hara and Barry Fitzgerald, while the kids who keep company with Mary Kate during the horse race are the sons of John Wayne: Patrick, Antonia, Melinda and Michael.
The beautiful locations of the film are all in Connemara: the park around Ashford Castle, the village and the abbey of Cong represented have been the background of most of the shooting, while the horse race took place on Lettergesh beach. The bridge from which John Wayne stared at his native house is still a destination for tourists looking for a souvenir photo and is located just outside Oughterard on the N59.
White O' Morn was the delightful little house that made popular all over the world the white cottages with thatched roof and red (or green) doors: currently there are only a few ruins near the bridge, but a copy of the cottage is located at Maam Cross, next to Peacock's hotel; a similar one was built in the village of Cong, on the road that passes alongside the abbey.
The character of Sean Thornton is based on the boxer Martin Thornton, a distant cousin of the director, who in 1943 was Irish Heavyweight Champion. After his sports career Martin, nicknamed Connemara crusher retired to private life in his native Spiddal, where he opened a pub. Martin passed away in 1984.
At the end of the film Mary Kate whispers something to Sean's ear: what Maureen O'Hara actually said is up to now a secret known only to her, Wayne and John Ford. Despite numerous conjectures, the secret has not yet been revealed and with the death of Maureen O 'Hara - the last living character of the cast - it will never be, thus making more subtly intriguing this absolute masterpiece. 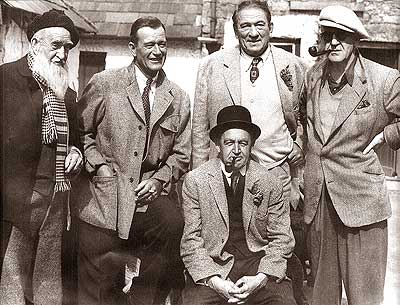 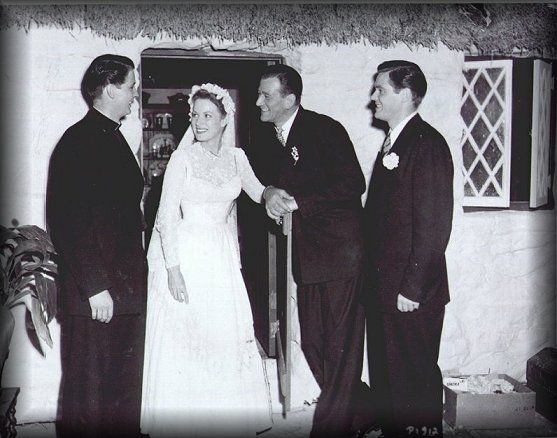 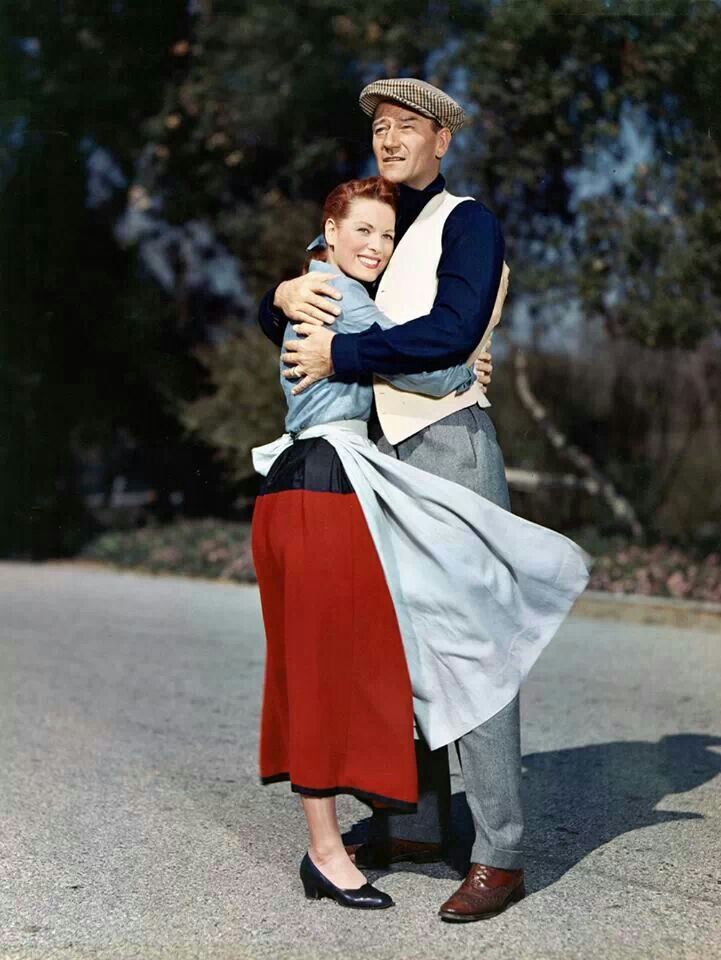 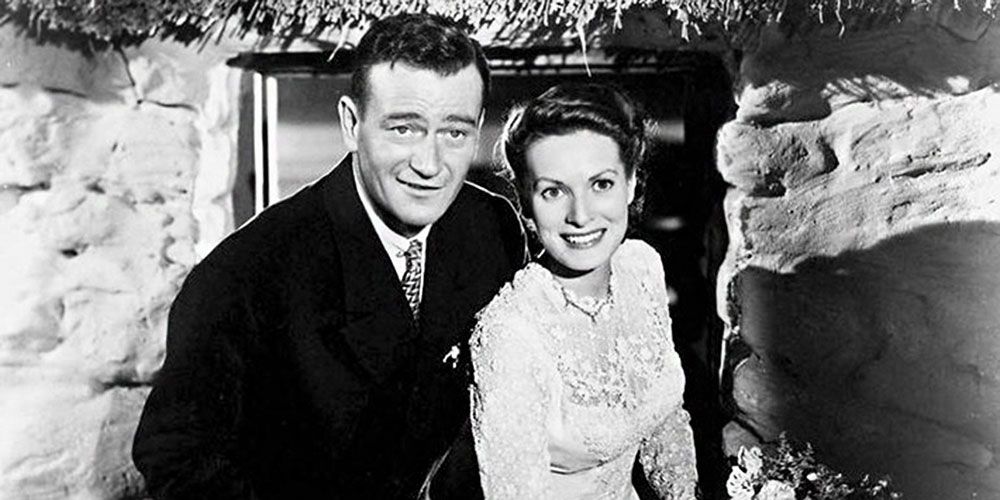 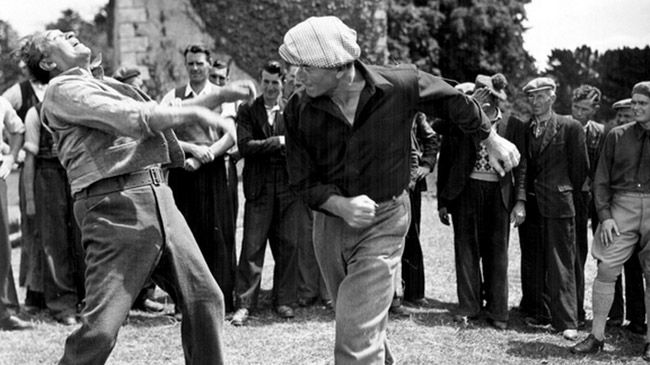 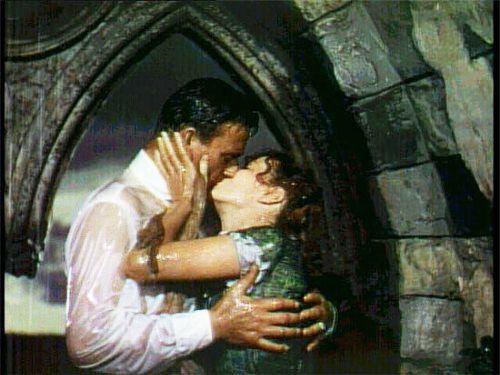 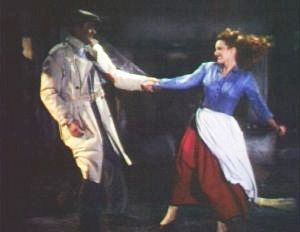 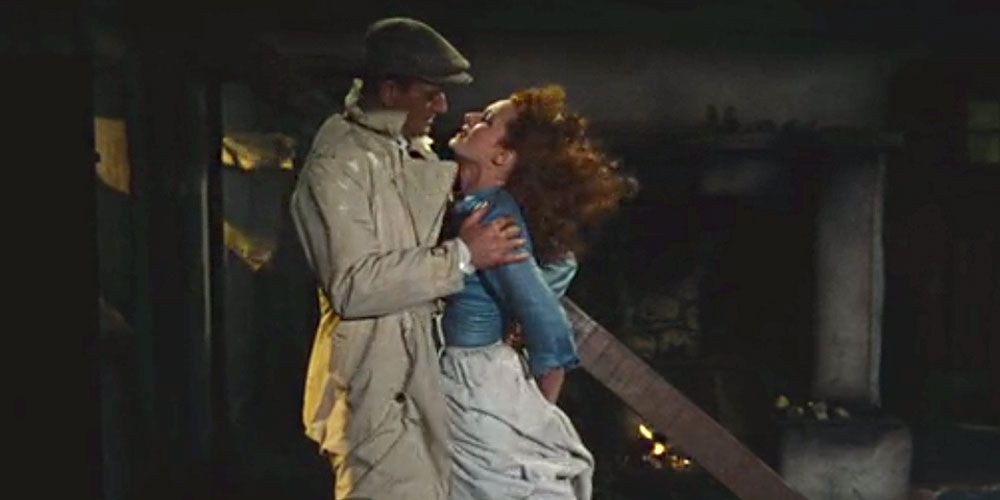 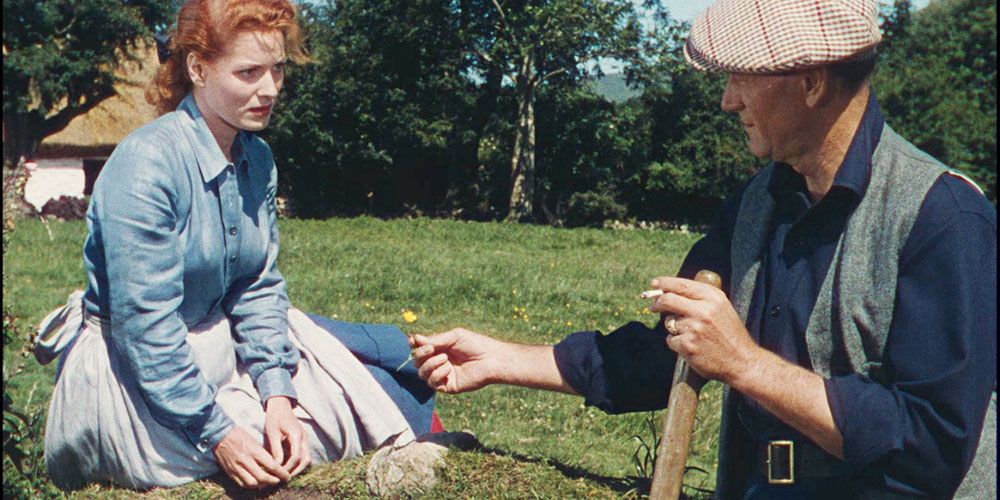 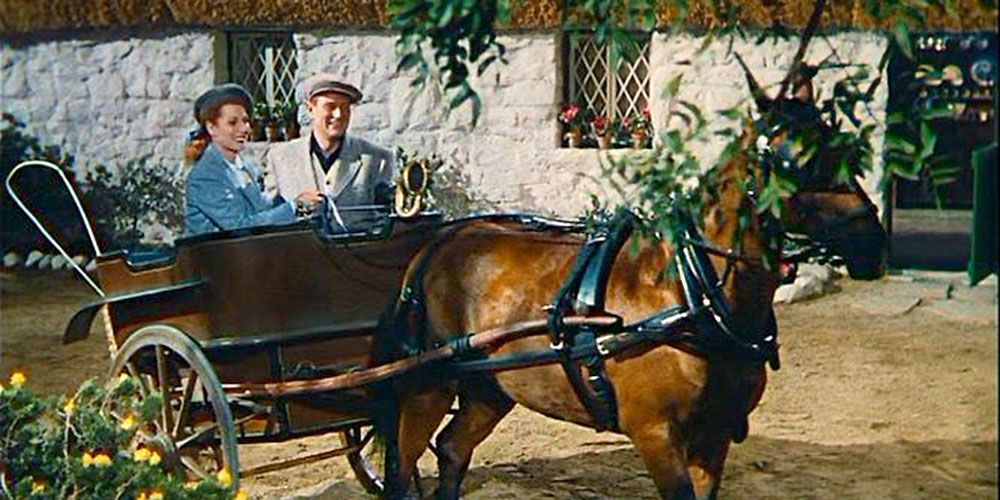 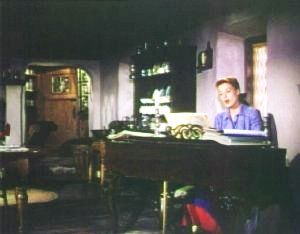 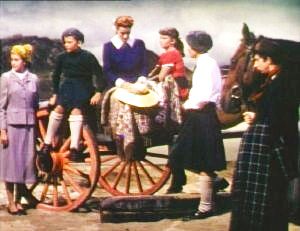 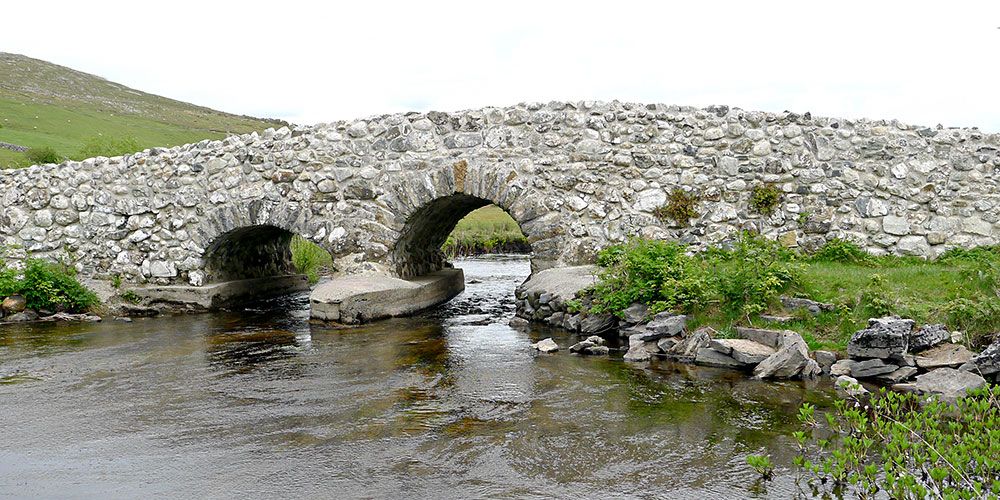 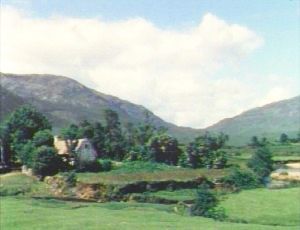 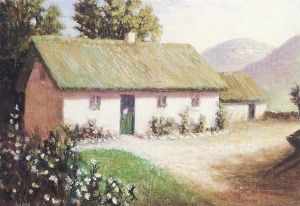 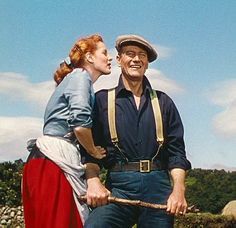 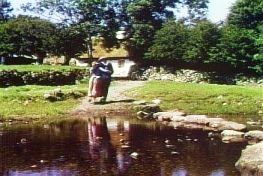 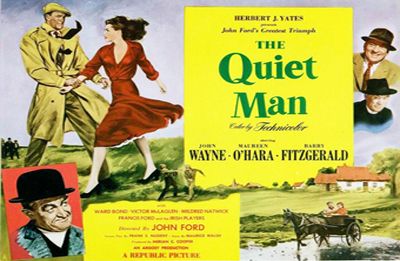