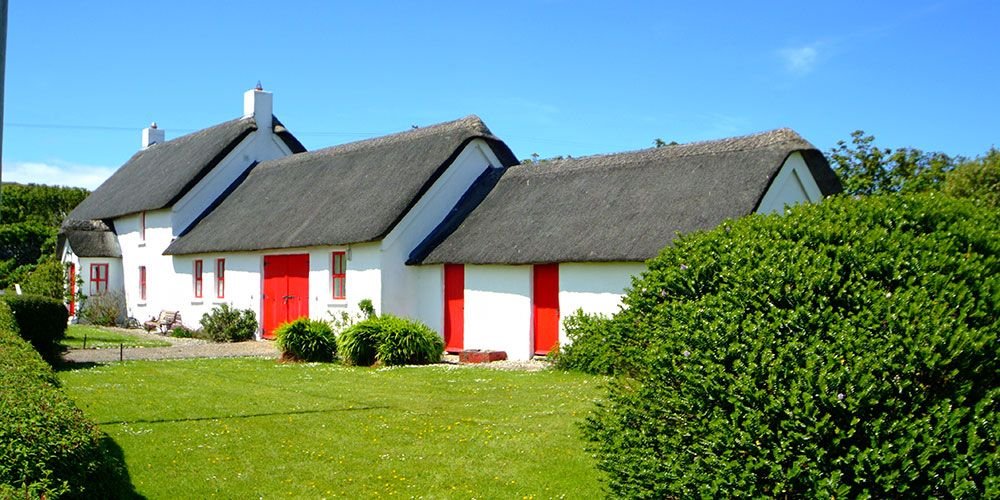 / traditions
When talking about the typical Irish cottage, one immediately thinks of those whitewashed, small buildings with a thatched roof, the front door divided into two and turf smoke coming out of the chimney in lazy spirals, spreading the typical scent all around ... a picture of warmth and coziness, surely the obvious concept of home that every Irish emigrant bore in his heart. Currently, these traditional houses are almost entirely the prerogative of the tourists who rent them for an unforgettable "truly Irish" holiday, while the locals have now replaced them with more modern buildings of easy maintenance (shingled roof, PVC windows, and doors, concrete brick walls etc.)
Moreover here, as in many other European countries, the craftsmen (Thatchers) who know how to build and repair a thatched roof are now scarce and very expensive. Last but not least, one has to take into account also the costs of insurance, considerably higher than usual ones, because of the easy combustibility of thatched roofs. For all these reasons nowadays the traditional cottage has become a "status symbol" of the Irish wealthy, losing the feature of the poor and lowly dwelling of the ancient rural population.

A bit of history

A census of 1841 showed that 40% of the population lived in those days in an only room cottage and many - if not all - of those 3 and a half million people wouldn't have shared the romantic, contemporary idea of the "thatched cottage": humans and animals had to live in one room, in a damp, smoky and poorly lit setting. Certainly the poor woman who had to deal with six or seven children, with a baby to breastfeed, a pig, a sheep and several chickens scratching about and the pot on the stove with the ubiquitous potatoes ready for the husband coming home from work would have bitterly laughed at Hollywood depiction of this kind of house... On these precarious living conditions weighed also the threat of eviction by the British landowners on whose land stood those humble dwellings. Obviously, the cottages weren't owned by the inhabitants and the rent was paid working in the fields and raising livestock of well-off landowners: if times grew difficult and the work was missing, the unfortunate peasants could only rely on the good heart of the owners. Under "normal" conditions every family could at least breed a dairy cow and cultivate a small field called "ridge", suitable to produce enough potatoes to allow for a year's sustain of the family. The potato blight that infested the crops in 1845-52 destroyed this kind of life and the few who managed to escape from the death for hunger, starvation or disease emigrated to the States in search of a better future.

Each traditional Irish cottage is based on a simple rectangular plan, with two doors oriented to the north and south: according to the popular wit this measure was useful to prevent daughter and mother- in- law from using the same door ... more likely, however, this expedient was to ventilate the room, because burning turf produces a lot of smoke and the chimney draught wasn't always effective.
The walls were built with local stones (and who has visited Connemara well knows that this material is not uncommon in the area!) and subsequently whitewashed; the transport was carried out with the help of a patient donkey: a distinctive icon of Connemara too, used for the loading of many goods, including turf.
There were few windows: an absurd restriction imposed by the British government, in fact, compelled the dwellers to pay a penalty if a house had more than six openings. The infamous "Window Tax" went on from 1799 to 1851 and was renamed "Typhus Tax", because of the increased respiratory problems deriving from this incredible rule. Besides being few, the windows were also very small, a feature useful to limit heat loss in winter and overheating in summer, which, however, aggravated the already mentioned health problems of the inhabitants.
The door divided into two parts is another salient feature of the Irish cottage: the possibility to open only the top half, in fact, contributed to recycling the indoor air and to expel the smoke and prevented the domestic animals from going in or out. Moreover, this feature represented also a great way to socialize with neighbours, while keeping the " privacy" of the inhabitants.
Inside, the house had one room with a dirt floor; over the years it became usual to cover it with local stone tiles, such as Liscannor sandstone. The heart of this place around which daily life focused was represented by the stone fireplace, often located in the middle, with a small closet on the back, used as a bedroom to take advantage of the heat. The walls on either side of the fireplace had sometimes some loft, used to store away the precious flour for bread, keeping it dry and moisture -free. In a different plan type the fireplace was located against the short wall, and at its sides there were two tiny bedrooms.
With a chimney that extended far beyond the ridge of the roof, the fireplace was the most solid part of the building: even today it is often the still existing only part of derelict cottages. In the fireplace, the fire was always burning and in the evening ashes were scattered over it to keep the embers hot till the following morning.
The importance of the fireplace in everyday life is widely proved by a traditional saying: "there's no place better than home", a free translation from the Gaelic "níl aon tinteán mar do thinteán féin".
The thatched roof is anyway the most remarkable feature of the Irish cottage. For this roofing the common domestic cane ( Arundo donax ) is used: this plant easily grows on moist soils, in temperate and fresh climates. In ancient times the roof insulation was made using sods of turf, currently, it is ensured by aluminum layers, which also are an additional precaution against fire.
The roofing begins from the lower parts and then up towards the ridge, which is called "book" from "buachán" a Gaelic word meaning "high, elevated point" (obviously the top of the roof is subject to a greater wear, due to the action of rain, wind and nesting birds). The bundles of reeds are tied to the underlying beams and held in place by U-shaped twigs of willow with pointed ends called scallops. The first layer is covered by another one which is secured to the previous with scallops, and so on, towards the ridge of the roof. The top is very often decorated with peculiar patterns (diamond, square etc.): this double final layer is added both for aesthetic reasons and to ensure a better insulation against atmospheric agents; it also represents a kind of "signature" of the craftsman who made the job. In very windy coastal areas the thatched roof is also covered with a network of iron fastened with large stones, to prevent a fast wearing out. If the roofing has been professionally made, it is estimated that the " book " (the ridge) should be replaced every 10 years, while the underlying parts can last up to 30 years before a new repair.

This skillful craftsman is nowadays very rare, because - as mentioned above - the roofing of modern cottages is now assured by the more economical and durable tiles, like the maintenance-free shingles. The few thatchers - like Ronan Finn - still in business, no more than fifty persons throughout the nation, therefore belong to an exclusive "caste", and must be contacted with an appropriate approach! Yes, even the lucky owner of a traditional thatched cottage must follow several strict rules when in need of maintenance... First, never hassle the craftsman with telephone calls or frequent visits, and never be surprised or disappointed if you aren't the next on his roofing schedule! The correct procedure is to go to the pub (so taking the chance to have a Guinness ...) and make enquiries about where the thatcher is currently working; after this you should end up in that place and stop to admire and praise his work: with the right words and a little luck (and perhaps paying him an all-powerful beer), the skilled craftsman will willingly agree to take on the task to repair your roof, setting the kick-off day!