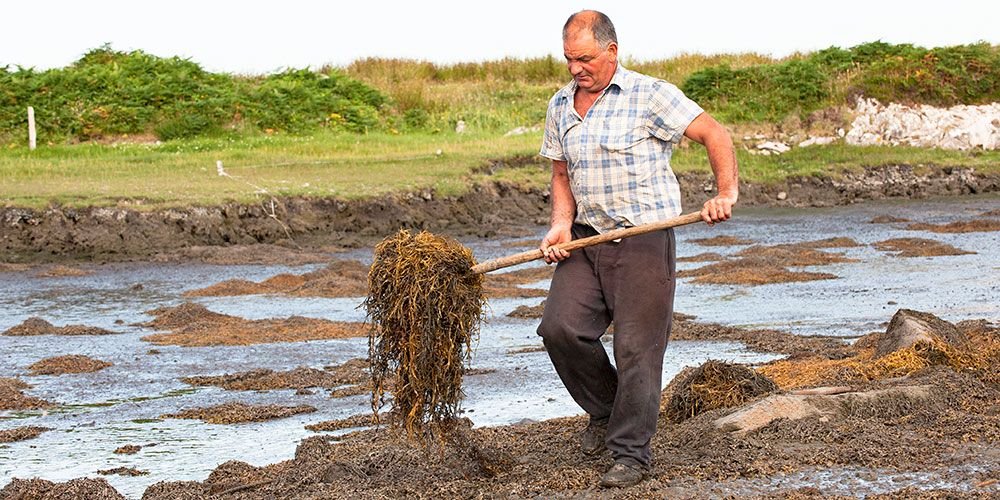 / people
Walking along the beautiful beaches of Connemara it is easy to meet large rounded rocks quite covered with a carpet of soft (and frankly a bit smelly ... ) seaweeds of the genus Ascophyllum nodosum, commonly called knotted wrack. In past centuries the shrewdness of local farmers exploited the economic potential of these vegetable masses, using them as a soil fertilizer: the movie fans will recall in this regard the sentence pronounced by Bull McCabe in the movie The field - God made the world, and seaweed made that field. The seaweed harvesting is actually an aspect of traditional life that has come down to us almost unchanged, and even today many fishermen in the area supplement their main business with this occupation.
Johnny Clogherty, a well-known fisherman living on the island of Maínis (Mweenish in English) near Carna started this job as a child, following his father's teachings, and knows how to properly collect the seaweeds, leaving a portion for reproductive purpose. Actually many pastures, such as those on Aran Islands, were created by the patient human work, by collecting seaweeds and mixing them with sand, thus obtaining a suitable soil for sustainable agriculture
Arramara Teoranta was founded in 1947 in order to take advantage of this wealth freely offered by the sea. This plant is located in Kilkieran and is involved in the collection, treatment and conversion of seaweeds into fertilizers, animal feeds and alginates, widely used by food and pharmaceutical industries as thickeners and stabilizers. Another possible use could be the production of biofuel.
The harvesting is carried out mostly by hand all around the year, leaving 15- 25 cm at the base of the plants, to allow a suitable re-growth of biomass, thus protecting the habitat of many animal species, such as crabs, molluscs, and seabirds; the dunlin, for instance, usually sifts the carpet of seaweeds in search of food. The seaweeds are then crammed into large bundles called climíni and subsequently transported to the processing plant by trucks or on curraghs. The crop is then thoroughly washed, milled, dried and crushed again: the resulting product is carefully inspected and then packaged.
Knowing the importance of these seaweeds, from now on you will look with different eyes the soft, green carpet covering the rocks on the beach .... and if you are fond of holistic care, in Leenaun you can also pamper yourself with a healthy bath in these prodigious vegetable friends!